If you were to think of the word ‘classic’ or even the phrase ‘Old School’ in relation to a pair of shoes, you would undoubtably think of the Checkerboard Vans Slip Ons. If not that specific pair, then most likely the Vans Shoe brand would be in that thought process somewhere.

If you were to think of the word ‘classic’ or even the phrase ‘Old School’ in relation to a pair of shoes, you would undoubtably think of the Checkerboard Vans Slip Ons. If not that specific pair, then most likely the Vans brand would be in that thought process somewhere.

And this isn’t without purpose, as the Vans Checkerboards have become an iconic symbol in footwear from their instant popularity at their release in 1977. But there is more to it than just a ‘cool’ design - the shoe has had some lucky breaks in it’s life to get it to where it is today.

If you are a Vans Shoe connoisseur, then you may have already known the founder of Vans shoes is actually an 8th grade drop out. Paul Van Doren was never a fan of school, and in his 8th grade year actually decided to leave his fellow classmates and pursue a career in Horse Racing odds. Known as ‘Dutch the Clutch’ around the track, Van Doren would trade odds statistics with racing fans for one dollar on race day. As you would imagine, this was not the ideal career choice in a mother’s eyes, and soon Van Doren was pushed into a job with his mother at the factory she worked in - a shoe manufacturing company to be precise. This is Van Dorens first steps into the career path that would forever change his life, and create a legacy for himself and his family for generations to come.

As somewhat of a custodian, Van Doren’s job was to sweep the floors of the factory, and to help assemble the shoes that were made there. Jumping ahead twenty years, Van Doren worked his way up and became the Executive Vice President of the same company he began working for as a custodian.

With his refined knowledge in shoe manufacturing, Van Doren decided it was time that he began his own shoe concept, and with the help of his brother Jim Van Doren, and two business partners Gorden and Paul, the first phase of the Vans shoe brand was born: The Van Doren Rubber Company. 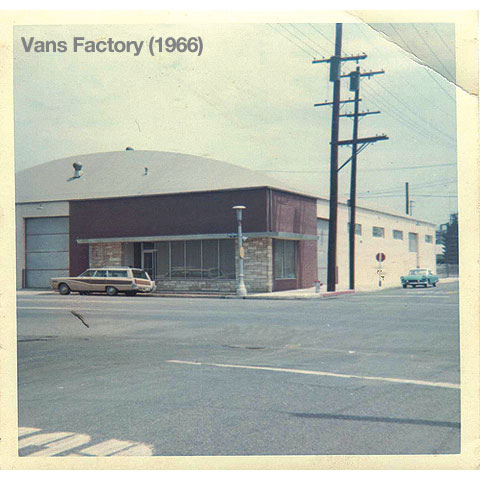 The doors to the manufacturing and retail storefront first opened March 1st, 1966 - designed to bring product from manufacturing direct to consumer (‘Since ’66’ - the slogan used today along with ‘Off The Wall’) The first few pairs of shoes were completely custom orders, one off shoes made for their prospective buyers and sold for $2.99 a pair.

Van Doren hit the jackpot in design and style, however, with the conceptualization of Style #48 - the very first vans slip on shoe produced in 1977 - but credit goes to his son, Steve Van Doren for the realization of the popularity within the checkerboard pattern design. Steve had noticed kids using markers to color the rubber outsoles on the sides of their sneakers, many with checkerboard designs, which Steve brought to the partners at the company. At first, they began manufacturing shoes with soles of checkerboard, only to switch to the checkerboard uppers shortly after.

During the time that Van Doren was refining the checkerboard design, a new wave of music was taking over Europe - a mix between the raw vocals and style of punk with the melodic undertones of Caribbean music, known as Ska. The second wave in the development known as the Two Tone wave, which held fast in the belief of racial equality. The emergence of this heavy push in the new music style as well as the cry out for equality became represented by core fans through the checkerboard pattern - the black and white checkerboard design represented equality among races, and was the go-to color choice for musicians and fans alike. The checkerboard slip-on pattern quickly became a favorite among this subculture, just in time for Van Doren to offer it in his shoe lineup. 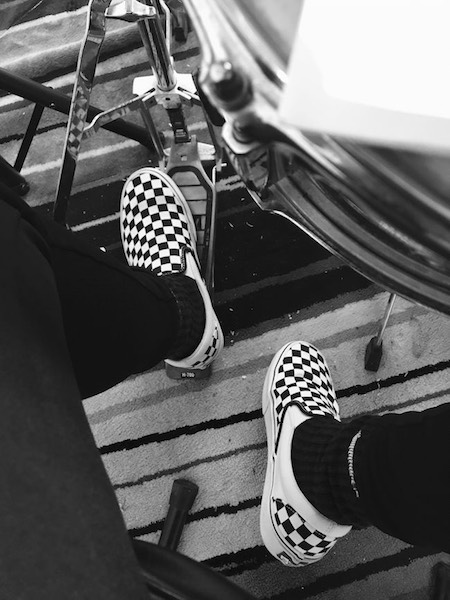 Popularity of the checkerboard shoe began to soar, but got it’s first moment in the spotlight in 1982 with the release of the classic coming-of-age comedy ‘Fast Times At Ridgemont High’ where the beloved character Spiccoli so effortlessly wore them during his time on-scene. Vans had shipped a selection of shoes to the director for consideration of footwear for teens to wear in the movie, and Sean Penn (who plays Spiccoli in the movie) chose the checkerboard slip-on as his go-to shoe for his characters’ role.

With a relaxed stoner attitude, Spiccoli was the definition of the carefree surfer/stoner that many teenagers hoped to be. In a time of rebelling against ‘the man’ Spiccoli would bring the shoe to an iconic level, defining the style of a generation. As if the on-screen exposure wasn’t enough, the classic checkerboard was so popular that it actually got a front and center spread on the Vinyl album cover for the movie’s soundtrack, as seen here: 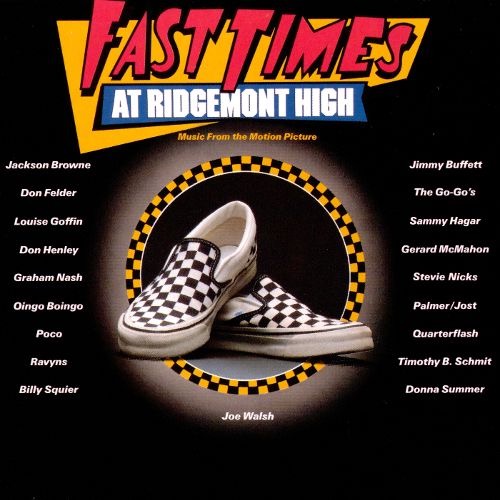 Vans really hit the nail on the head with the checkerboard slip on - designing a silhouette that was easy on the eyes and comfortable on the feet- it was the perfect balance of a timeless design, which also represents a time and a place - the truest marks of an Icon.